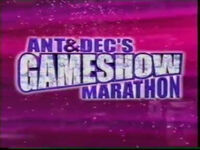 In September 2005, the ITV network celebrated its fiftieth anniversary with a season of ITV 50 programming that aired. One of them was a seven-week special celebrating classic UK TV game shows, it was called Gameshow Marathon presented by Anthony McPartlin and Declan Donnelly, better known as Ant & Dec. Each episode of Gameshow Marathon chronicled a different game show and the UK version of Sale of the Century was the fourth to be played. Six celebrities competed in these classic game shows but Vernon Kay, Ruby Wax & Eamonn Holmes were the three contestants who played Sale in this episode.

This particular playing of Sale of the Century was a mixture of all three versions. Gameplay was the same as before except that the players started with £10, there were five Instant Sales, the Fame Game questions were worth £10 and had faces of celebrities in place of numbers (ala the Australian version) with prizes behind all of them and in order to get a chance to win the game by having the highest score, each player must buy at least one prize from any of the Instant Sales.

NOTE: Upon buzzing in, the scores & names of the other players disappear.

Correct answers were worth £5 apiece.

Going into the first Instant Sale, Eamonn was in the lead with £20, Vernon had £15 and Ruby had zero. The first Instant Sale prize was a Hostess Trolley normally priced at £230, but it was on offer for £16. Eammon bought it, bringing him down to £4.

The second Instant Sale presented a set of four tires worth £300, but on offer for £20. Vernon bought the tires which wiped him out since he had exactly £20.

The round ended with the first Fame Game. The score going into that first game was Vernon with £5, Ruby with zero and Eamonn leading with £19. The subject of the first Fame Game question was Dec. Vernon answered Ant but still received £10 plus a pick of the board. Vernon chose Mr. T and won a camcorder for a home viewer.

Correct answers were worth £7 apiece.

Going into the third Instant Sale, Vernon had the lead with £57, Eammon had £26 and Ruby had £4. The next Instant Sale prize was a massage chair normally priced at £3300, but it was on offer for £25. Eammon bought the chair, bringing him down to £1.

One of the questions in this next set was talking about one of Eammon's shows and naturally he did answer himself.

The fourth Instant Sale showed a home DIY kit worth £525, but on offer for £22. Nobody bought the item. Ruby couldn't afford that or the one before since her score was lower than the price.

The round ended with the second Fame Game. The score so far was Vernon ahead with £92, Ruby with £21 and Eamonn with £43. Vernon answered Britney Spears and got frozen out since he was wrong. Eammon capitalized on that miss and guessed the correct answer Charlotte Church and thereby receiving £10 plus a pick of the board. Eammon chose Rob Bines the Witch and won a MP3 player for a home viewer.

Correct answers were worth £10 apiece.

One of the questions in this next set was talking about Vernon's ex-wife Tess Daly. But it was Eammon who answered Vernon. Later on, Vernon answered a question about Ruby.

The final Instant Sale prize was a hair-styling kit worth £150 for only £10. Ruby at last bought the item and thereby avoiding early elimination and giving her a chance to win.

The rest of the round was played according to time and when that time was up, Vernon came out as the winner with £142. Eliminating Ruby & Eammon, each raised £5000 for their favorite charities.

Sale of the Century[]

The Sale of the Century consisted of four prizes plus a brand new car. And these are the prizes:

Vernon elected not to buy any of the prizes and wishes to gamble for the new car.

Vernon had to answer four out of five questions correctly to win the car which he did. And so the car in addition to everything else went into the home viewer prize bank.