The ITV and Challenge versions followed the rules of the original American version. Three contestants start off with £15 (£10 on early ITV series). Questions are worth different values starting with £1, later increasing to £3, and finally £5; by the early 1980s, the £1 questions were eliminated. The question is asked and players can buzz in at any time. Correct answers add the money to their score and incorrect answers subtract the money from their score with only one player allowed to buzz in on each question.

At six points during gameplay, all contestants would be offered the opportunity to purchase merchandise at a bargain price. The first player to buzz in after the prize was revealed purchased that prize. (In so doing, a "losing" contestant might not advance to go shopping at the end of the show, but could leave the show with a considerable haul for one day's play.) In the early days, the prices of all prizes offered were expressed much as one would hear in a department store, and would increase as the show progressed (e.g., £7.95, £11.95, £14.95, £21.95). All prize values were rounded up to the nearest pound before being subtracted from the score of the player who purchased the prize (later on, prizes were in full pounds, like £8, £12, £15, £22). Each instant bargain was hidden behind a curtain; the announcer would mention the price, and then the curtain would open as the prize was revealed. If a contestant buzzed in before the curtain opened, it was declared "No Sale", the contestant would have the price deducted from his/her score (but not win the prize), and the other contestants could then buzz in.

Also, an "Open Sale" was offered just before the commercial break, in which a number of smaller gifts were offered for less than £5 each. In this situation, more than one player could buy a given gift, and a player could buy any or all of the prizes on offer. They could even buy two or more of some items.

The Challenge TV version kept the rules of the ITV version, except there was no "Open Sale". There were five rounds with questions being worth £1 in round one, £3 in rounds two and three, and £5 in rounds four and five. Finally, the game ended with 60 seconds of £5 questions. The player in the lead at the end of this round was declared the champion.

The Sky Channel version had rules that were based on Australia's 1980-1988 format and America's 1983-1989 format, with better prizes than before. There were only three "Instant Sales" (renamed "gift shop" items), and only the player in the lead could buy.

The biggest change was the "Fame Game": Here, a succession of increasingly larger clues were given to the identity of a famous person, place, or event. In this round, players could buzz-in and answer at any time, with the player shut out for the remainder of the question if they gave an incorrect answer.

If one of the players buzzed-in and answered correctly, the contestant chose from a game board with nine squares. If all three contestants failed to come up with a right answer, then nobody got to pick. Once chosen, the space selected would be spun around to reveal either a relatively small prize (typically appliances or furniture valued at around a weekly wage) or a bonus money card, which added to the player's score.

The game ended with the Speed Round where the host would ask as many questions as possible within 60 seconds. The player with the most money when time ran out won the game.

If there was a tie for the lead after the Speed Round, another question was asked of the tied players. Answering this question awarded £5 and the win; missing the question deducted £5 and lost the game.

The winning contestant would be given the opportunity to spend their cash total on at least one of several grand prizes at the "Sale of the Century"; the grand prize being a new car. Champions could buy more than one prize, but they could never buy every prize at less than the total of all of the sale prices. They also had the option to put their money in the bank and come back next time to play again. Towards the end of the run, the car was eliminated as a buyable prize; now the champion, provided they won the game with £140 or more, could choose to shop or answer a possible four of five questions, with no risk, to win the car.

On the 1989-91 & 1997-8 versions, there were a series of six prizes (five in 1997-1998) and as the contestant's score built up, it applied to the next highest prize, with a car again being the top prize, which was available for £585 (£500 in 1997-8). Like the Australian and American versions, they could buy the prize and leave or risk it and come back. However, unlike the Australian and American versions, there was no cash jackpot up for grabs or chance to buy all the prizes on stage due to restrictions by the British broadcasting authorities limiting game show winnings to £6,000 from the late 1950s until 1993.

On all versions, losing contestants kept the money and prizes earned. 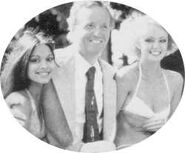 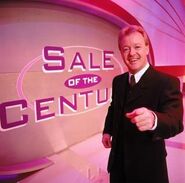 Sale of the Century @ UKGameshows.com