Temptation: The New Sale of the Century is a television game show loosely based on both the original Australian and American Sale of the Century versions, plus the 2005 Australian version, also titled Temptation. The show began airing in syndication on September 10, 2007, with the last first-run episode airing on May 23, 2008. Reruns continued until September 5, 2008.

The series was hosted by Rossi Morreale with former talk show host Rolonda Watts as announcer. Temptation was produced by FremantleMedia North America, and syndicated by 20th Television.

As with other syndicated half-hour programs, Temptation aired two episodes in some markets, with the second episode at a later production date. In July 2008, Temptation was canceled due to low ratings (it was the lowest among game shows during the 2007–2008 season) and replaced by Trivial Pursuit: America Plays on most stations.

The game was played in two rounds, each containing several parts. Three contestants, one a returning champion, each started the game with 20 "Temptation dollars" (T$).

This round was broken down into three parts: a "Speed Round", an "Instant Bargain", and a "Fame Game":

After the first commercial break, the second round consisted of "Knock-Off", a second Instant Bargain, a second speed round, "Instant Cash", and one final speed round.

The losers kept any cash and prizes won during the main game; unlike earlier incarnations of Sale of the Century, no contestants received their score in cash, as "Temptation dollars" (T$) were not valid currency. Any player who had not won any prizes up to the end of the game received unacknowledged parting gifts.

The end game was played in two parts:

Unlike the Australian version and the 1980s Sale of the Century, there was no opportunity to buy all on-stage prizes nor receive a cash jackpot for accumulating a high amount of money.

A contestant continued as champion until they purchased a prize from "Shopper's Paradise" (as with the 1980s version, a contestant who had accumulated enough money to do so could not buy more than one prize), had accumulated enough money to purchase the top prize, or was defeated. Unlike previous versions, a five-time champion was forced to retire and buy any prize they could afford, whether or not it was the top prize.

Before commercial breaks, offers for products at discounted prices were advertised. These items were purchased online at the show's official site. The offers were originally separate items, but later became generic "60% off retail" plug offers. 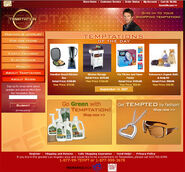 Owned-and-operated stations of MyNetworkTV were among the stations carrying the show, as was the former WTBS Atlanta (currently known as Peachtree TV). MyNetworkTV aired two sneak preview episodes featuring American Idol alumni Mikalah Gordon, Justin Guarini, and Kimberly Caldwell on September 5, 2007 in prime time. These episodes were aired again on March 13 and March 14, 2008.

The first taped week of the series did not air until March 3–7, 2008 and featured a slightly different game structure. The show began with Speed Round #1 followed by Instant Bargain #1, the Fame Game, and Speed Round #2.

After the first commercial break, Knock-Off was played followed by Instant Bargain #2, a second Fame Game worth $25, Instant Cash, and Speed Round #3.

In addition, the price tags at Shopper's Paradise were white instead of orange, and Morreale showed the winning contestant around while Watts described the prizes.

With the exception of the preview episodes, which rated 0.8,[2] Temptation never rose above 0.5 in the Nielsen rating system, making it the least-watched game show on broadcast television that year; the next lowest-rated game, Merv Griffin's Crosswords, maintained a 0.8–1.0 share.

Although the final first-run episode of Temptation aired on May 23, 2008, the show's official cancellation was not announced until July 29. The final episode was later broadcast as the last repeat on September 5, making it one of only a handful of programs to do so. The series was replaced with Trivial Pursuit: America Plays on most stations that carried it, although Pursuit inherited the low ratings its predecessor had and was canceled in April 2009.